TIM LINDQUIST PORTFOLIO
SUBLEQ Processor + SRAM
​For the integrated electronics (EE330) final project, my partner Jakub Hladik and I built a “SUbtract A from B and Branch to C if LEss than or EQual to zero” processor. It is a one instruction set computer. The idea came from this Wikipedia article describing the abstract idea of this machine. Mathematically it seemed to be possible so we set out to make the world's first layout implementation of this simple processor. The processor works on the basis of bit manipulation. Each memory location can store an arbitrary integer and the instructions themselves reside in the memory as a sequence of integers.

SRAM Layout Layers
SRAM: 256x8 Bit
​For the build, my role was to create the 256 x 8 bit SRAM memory. This was used to store the initial program before execution and store the result after. My design for the SRAM was a 6 transistor cell that could read and write a bit. For implementation into a layout, I constructed the matrix with row and column decoders to access each byte of memory. The matrix of the memory consisted of 4 columns of 64 rows. My partners job was to create the processor to interact with my memory. He was able to synthesize his layout from the constructed VHDL code, modeling the operation described by the one instruction machine. My layout was done by hand as to condense the design as much as possible. I developed a highly optimized 6T cell and a binary method to connect all 2048 different decoding wires effectively. We were working on a 0.5um process and had an area of 40 x 40 lambda to work with for manufacturing from MOSIS.
Decoder
​The last component was an 8 to 256 decoder used to turn on the correct word line to access the correct address in memory.  The design for this was a simple 8 input NAND gate followed by an inverter to create an AND gate to drive the word line. A significant delay was accumulated on this component but met our 1MHz clock specification. It was designed in the same vertical space of the cells to easily integrate the systems together. ​
​An issue I had during this was the overwhelming problem of how to wire the 2048 decoding wires. I spent a lot of time contemplating the best way to do with options of: building an automator program, labeling the wires and perform some sort of auto-routing or my least favorable to route by hand. To effectively solve this problem I designed 8 masks patterned with a power of 2 binary sequence patterns. Each pattern was duplicated and aligned to the final layout. This drastically decreased the amount of work I had to do and simplified the process down to 8 easy steps. Routing of all 2048 wires was done in an hour instead of a week if it were to be done by hand. ​ 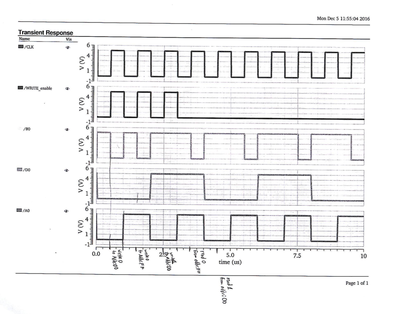 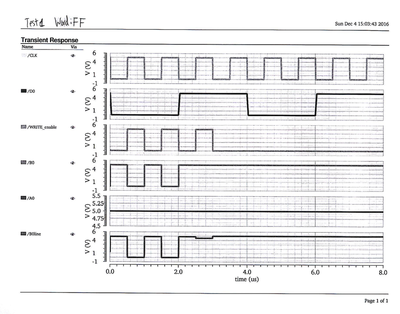 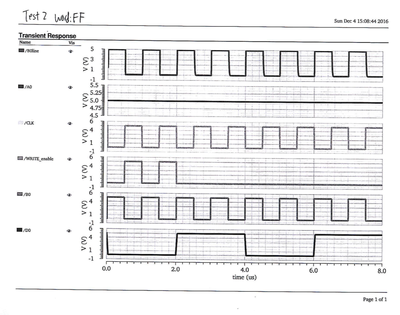 SUBLEQ Processor Layout Layers
Architecture Design
Jakub's role was to design the processor layout. He designed a very simple multi-cycle architecture consisting of four registers, a program counter, subtractor, and control logic. An abstracted diagram can be seen below.

During each cycle, one memory read or write operation occurs. The principle of operation can be split into six cycles as follows: The processor operates on pointers, that is, the first “value” that gets fetched into a register is a pointer to the actual values that the processor operates on. That is why the processor needs to fetch each value “twice”. The first fetch is the pointer destination and the second fetch is the dereferencing of the pointer. The same does not apply to register C because C is simply a pointer to the next instruction.
The instruction the processors performs every time could be transcribed as “subtract value A from B and go to C if the result is less or equal to zero”. This does not sound like much but this processors, provided it has enough memory, can solve any algorithmic problem. We can force branch by making the value C the same as the next program counter value, add by subtracting negative numbers and we can branch by providing a different value C. Sample testing program can be seen below. ​
Architecture Simulator
To verify the programs Jake wrote for this processor, he wrote a very simple simulator. It takes in a file with the machine language program (initial values of the memory), and simulates the execution of the program step by step.​
FPGA Prototype
Jake decided to make a FPGA prototype on the school’s Altera DE2-115. He created a test bench that allowed him to step through the cycles and verify the values going into and out of the memory. He discovered a few timing issue when running the design on a physical FPGA chip that made him change the type of memory used in the prototype (level-sensitive instead of edge-sensitive).
CMOS Layout
After making final improvements on the FPGA prototype, Jakub moved to designing a CMOS layout. He used Cadence Encounter to synthesize, place, and route the core. The synthesized schematic can is shown on the next page. He utilized the pin planner functionality of Encounter to specify where the input and output pins should be. He also ran clock synthesis (1 MHz target speed) and ran the clock analysis. The final layout can be seen below.
Results & Testing
The result from the Cadence simulation showed a working simple processor running at 1MHz tested by implementing a “for loop”. The processor required 2500 transistors and the SRAM required 20,000 transistors. The processor dissipates 0.2mW of power. Even though it may be limited to its computing power of one instruction set, this processor could have many low power application if time isn't an obstacle. ​

​Below shows some of the testing that was done to see if the layout implementation operates correctly. 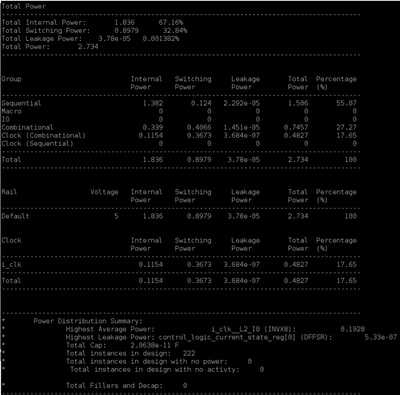 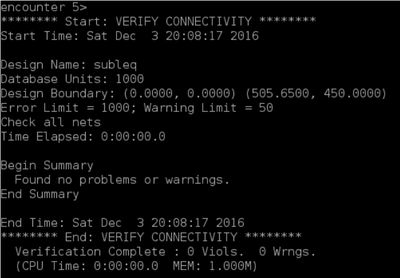